The Origins of the Merlion Legend

This article discusses the origins of the Merlion legend. Here, we attempt to strip fact (or at least apply some logical assessment) from fiction. In doing so, we hope to have a better understanding of what the merlion could actually have been like if it had existed sometime in the past.

Physical Characteristics of the Merlion?

Is it a fish or mammal? If we examine the stories behind the merlion legend,

The official documentation in Sejarah Melayu (Malay Annals) related to a Palembang Prince Sri Tri Buana sighting a strange beast that looked like a "lion" during his visit to Singapore. But lions did not exist in South Asia. The only Asiatic lions lived in a small area in northwest India. Could he have mistaken it for a tiger? This seems unlikely for a presumably highly educated member of the royal family. In his lifetime, he must have seen tigers in his realms, so he should have known a tiger from a lion. Anyway, his traveling companions must also have collaborated with his story so we will have to assume that it looked something like a lion.

Could it be some Chinese settlers playing a trick on the visiting dignitary by putting their lion dance costume? This is also highly unlikely as there were probably no Chinese settlers here at that time and the lion dance costume don't look like a real animal.
We know that it was sighted on coastal lands and in the sea, so we can assume that it must be some sort of sea mammal. We will have to assume it is a mammal as they are said to be intelligent and could probably interact with other species. It probably fed on fish and / or vegetation.

This would rule out the merlion being a fish unless you are talking about lungfish and mudskippers which are too small to attract any attention.

Some would suggest that it could be sea reptile / dinosaur like the one reportedly living in the Loch Ness. Ancient Asian people's (particularly the Chinese) encounters with dragons suggests that this may be so. However, the disappearance of dinosaurs long before the evolution of man makes this theory highly unlikely. Until it can proven that dinosaurs existed in recent history, we can dismiss the merlion-dinosaur link.

However, recent discoveries of giant squid and prehistoric fish leaves some room for speculation of the merlion being a prehistoric creature of some sort.

A giant snake? Maybe, but large snakes are not known in this region.

Komodo dragons (monitor lizards) existed in Indonesia. Maybe the Javanese experience with these giant reptiles helped shaped the merlion's physical characteristics. If this is so, then the merlion's tail should probably been more lizard-like. Komodo dragons are not sea creatures. 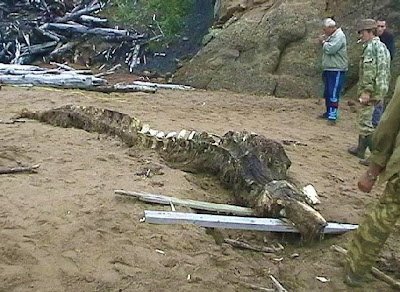 However, the legend states that it had a head of a lion and a tail of a fish. This does not imply it was a lion but that it had a big medusa-like or tentacle-like head to borrow from the Greek legends. Its tail suggest that its back end was closer that of a marine mammal like the dolphin or whale - indicating that it was a powerful swimmer and could possibly live underwater for a long time.

The description that it looked like a lion may have implied that it was fierce-some looking and was not something you wanted to mess around with. It also indicated it was a powerful / strong creature which was not afraid of anything.

Its size is subject to conjecture - it was said to be both big and small. If this is true, we would have to assume that different people saw the parents and baby of the merlion separately. Alternatively, it could indicate that the creature was highly adaptable and could change shape quickly.

In terms of color, it would probably be silver grey to make it less visible in the sea. However, some suggested that it was closer to a sea lion coat's color. This is because its name is merlion - "mer" being french word for "sea or marine". So could it be a sea lion? It is unlikely that a merlion would be a sea lion or even a golden seal as these animals do not live in this part of the world (except in the zoos, of course). Moreover, these animals are relatively small compared to the descriptions of the merlion which is supposed to be gigantic.

Frankly, we don't believe the merlion had pearly scales if it was a mammal. It is also highly unlikely that creatures which spend most of their time in the sea would have a long mane like a lion. The merlion would have to be streamlined to facilitate swimming - just like other sea mammals. Could mammals' whiskers be mistaken for hair? This again, would seem to be highly unlikely.

There are no indications of its birth or death. We will have to assume it lived a long time - possibly a hundred years. No bones were found on land but this is not uncommon for sea / marine creatures. Stories that it appeared in a storm suggests that it spent much of its time in deep sea and thrived in rough seas. It was probably a nocturnal creature. It had very good eyesight and had good vision even in the deepest, darkest ocean. This implies that it could live in places which other creatures could not or would not.

It possibly spawned its young on land. It probably also took care of its young for a few years. We are not sure if it produced its own milk for its young or gave it regurgitated food. When its offspring was big enough to fend for itself, it left for the seas. In all likelihood, merlions were not social animals. They formed a family unit only when they had an offspring to take care of. There are no indication how often the merlions bred. We will have to assume that they only bred one offspring in its lifetime. It probably traded species proliferation for longevity.

Where did the merlion originally come from?

Possibly from the deep seas in the central Pacific. The merlion myth is similar to the legends of mermaids of the Greeks and possibly myths about the lost continents of Atlantis in the Atlantic ocean and Mu of the Pacific ocean. However, the existence of these civilizations have not been proven. From its rare sightings, we can deduce that it may be a migratory animal - alternating between Singapore and the deeps of the Pacific. Its migratory habits is likely to be tied to the migratory patterns of its main source of food - namely fish.

Possibly because it was a safe place to raise its young due to the lack of natural predators from land or its coastal waters. Smaller land mass usually could not support large animals. Its deep coastal waters were also an advantage of such a creature. Singapore's volcanic origins could also be a factor in its choice. Singapore may have reminded the merlion of the natural environment of its lost homeland many thousands of years ago.


When was the Merlion last seen?

The last records were from the Malay Annals (literary and historical work from the 15th or 16th century). It documents the visit of Prince Nila Utama of the Sri Vijaya empire in the 11th Century to ancient Singapore. According to fragmented records, the Sumatran prince's ship had to make landfall in Singapore (then called Temasek) after the ship had been damaged by a big storm.

As they waded ashore near the Singapore river, he saw a mystical creature which looked like a lion that could also swim like a fish. It disappeared as soon as it saw the men. The prince decided to renamed the island "Singapura" which in Sanskrit means Lion (singa) City (pura) after this encounter. As their ship was leaving Temasek, they felt a feeling of dread as they sensed that something with glowing eyes was following them though they could not see what it was. It only disappeared when the ship was several miles away from the island. This may indicate that the merlion is territorial and / or protecting its young.

South Asian and Chinese sailors also reported sighting strange creatures which some attributed to manatees, dolphins or simply swimming animals etc. though none of these animals looked remotely like the merlion.

By the time of the British rule of Singapore, only oral traditions existed of a strange creature that once lived in Singapore. These stories related to the creature guarding Singapore from an unknown threat from ancient times. Was the story made up by locals to scare away blood-thirsty, slave-taking Asian pirates - particularly those from the Sulu Sea?

Why did the merlion simply disappear? Perhaps, its time had come . Maybe it retired to the deep ocean to avoid contact with humankind.


What the merlion means to people

Today, only statues (an exaggerated physical recreation of the merlion) exists throughout Asia to remind us of the time when animals, not man ruled the earth. Perhaps it is only an allegorical tale about the necessity to be in harmony with nature.

As a famous quote goes: "A richest person is not one who has the most. But the one who needs the least."

With the threat of global warming etc, it is a timely reminder that humankind do not have absolute control of planet earth. If we do not take care of our environment, we too can become as extinct like the merlion. What good are legends if there are no people to remember them by?

Perhaps, the merlion legend serves as a lesson on survival. Like feng shui, the merlion can protect the country from destructive elements only in a limited way. In the end, it is all up to us. Some empires exist for a thousand years. Some last only a hundred years. During our short time on earth, we should make the most of it. To create a future we can be proud of. To ensure that we do not end up being a forgotten chapter in the history of mankind. A story very much like the merlion legend.

While the merlion is a mythical beast as far as we know, its characteristics and spirit lives on in the hearts and minds of many Singaporeans.

Fact or fable, we love our much venerated merlion just the same.

For a light-hearted story about the Merlion, read my partner's article on the Merlion Legend here.

© http://comsg.blogspot.com - the origins of the merlion legend
Posted by comSG at 8:38 PM