The original Merlion is the mid-sized statue (8.6 meters weighing 40 tons) seen in the photo - and sprouts water from its mouth when tourists get too close - which they often do!

This Merlion sits facing East aligned to the most auspicious feng-shui / geomancy position as advised by feng shui experts. The Chinese believe that aligning structures / buildings to feng shui principles helps this resource-poor island to remain prosperous despite its more important shortcomings - like the lack of water, natural resources and sex movies.

The Merlion was designed in 1964 by Fraser Brunner, the curator of the Van Kleef Aquarium, as an emblem for the then Singapore Tourism Promotion Board. The lion head represents the animal spotted by Prince Sang Nila Utama. The fish tail symbolises Temasek, which means "sea" in Javanese.

This Merlion structure was originally sited (1972-1997) at the mouth of the Singapore river but had since been moved in 2002 to its new location - the Merlion Park (due to a building of the Esplanade Bridge which blocked the view of the original sited Merlion and the Marina Bay waterfront). There are another Merlion in the Merlion Park - a baby merlion which you can hug as much as you like but which it is much too heavy to carry in your arms. 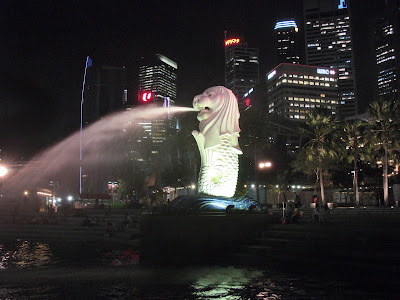 In all, there are 5 significant Merlions in Singapore, the largest is a 36 meters lighted Merlion structure at the Sentosa island in southern Singapore - where many illegitimate children were fathered.

The fourth Merlion (3 meters) is at Mount Faber and fifth at the Orchard Spring Lane.

There are variations of the Merlion which are found throughout Japan (Nambo Paradise Botanical Gardens in Tateyama, Chiba) ; China (like the XinYi Condo at Chang'an No. 1 & Window Of The World theme park in Shenzhen) & (Mystic East of Chessington World Of Adventurers theme park in London) where Singaporean investors had worked or lived. It is not reported in official sources, but I have a small Merlion in my garden too.

The Merlion Legend According to Javanese and British Historical Records

According to the "Malay Annals" (literary and historical work from the 15th or 16th century), ancient Singapore (Temasek) got its name in the 11th Century from a visiting Prince Nila Utama of the Sri Vijaya empire.

The Palembang Prince who, on landing on the island, pissed in his sarong when he saw what he thought was a hungry lion coming menacingly towards him. He promptly named the island Singapura - the Sanskrit word for Lion (Singa) City (Pura) so as to warn people not to visit the island. He also swore never ever to return to the island - not until all animals larger than a mouse deer had been totally eliminated from this incredibly dangerous island.

He got his wish when the British landed in the early 1800s and used their big guns to promptly kill off all the lions (actually they were tigers) and thus preventing Singapore from being labeled a "Tiger Island".

The tigers were so afraid of the British, they became pale (white, in fact) and migrated to Bengal, India. These white tigers are an endangered species. Now that the dreaded British colonial rulers have departed from the Lion City, some white tigers have made a comeback in Singapore namely in its famous Zoo. Tourists wanting to be eaten by tigers can now go to the Singapore Zoo to satisfy their curiosity.

The merlion legend was born when the Brits saw the fleeing lions (tigers) swimming furiously across the Straits of Johore to get away from their guns.

The legend of the merlion having destructive red x-ray eyes was actually fabricated by the British to justify killing these normally peaceful and graceful creatures which ruled Singapore since the time when the island was just a volcanic outcrop. The red lights could also be Johore natives firing back at the British to ensure they do not cross the Straits without proper invasion documents.

Singapore was then also a safe haven for pirates during the British rule (as depicted in the 2007 blockbuster movie "Pirates of the Caribbean - At World's End" which starred Johnny Depp). Yes, in those days, pirates ate people as they were cannibals.

Nowadays, the only pirates you see in Singapore are those people selling pirated DVDs on street corners. These DVD pirates are usually arrested by the Police within one month of starting their illegal business - so they are an endangered and starving species too.

The Origins of the Merlion

Legend has it that the merlion were desendents of majestic lions from the fabled lost continent of Mu (also called Lemuria or Pacifica) which existed some 100,000 years ago. Mu was said to be the mystical "lost homeland" , the garden of Eden - the birth place and "golden age" of humankind. Many of the Asian, Babylonian, Polynesian and native American oral traditions are said to have originated from this Atlantis-like continent in the Pacific.

The continent was progressively destroyed some 12,000 years ago by asteroids, volcanic eruptions, earthquakes and glacial meltdowns. The survivors had to sink, swim or hitch a ride. Some made their way to Singapore which was then relatively uninhabited. One of them was a merlion.

The merlion may have existed in Singapore in prehistoric times. But sighting of the merlion in recent history can be taken with a slight pinch of salt from the sea.

Frankly, if you asked me, the sailors must have been stoned cold drunk when they saw the Merlion. The sailors probably saw a manatee (dudong or sea cow) a large marine mammal that is common in Singapore waters even today. Visitors can also get up close and personal with a manatee at Singapore's Underwater World at its leisure island - Sentosa (soon to be named "Universal Studios Island").

No, manatees do not eat people! Manatees are not sharks. Even sharks don't eat people - especially tiger sharks. Watch the DVD "Sharkwater" to find out more!

The Merlion is a tourism symbol which is copyrighted by the Singapore Tourism Board (STB).