Lighting Strikes the Merlion - Good or Bad Omen?
On 28 February 2009, Lighting Struck the Merlion and created two big holes in the head of Singapore's most famous icon which required extensive repairs.
Is the lighting strike on the Merlion a bad omen for Singapore?

Is it as significant as the 9/11 when terrorist driven planes crashed into the Twin Towers of the WTC? Was the bad karma of 9/11 responsible the Sub-Prime Crisis which has led to the demise of many big well known Wall Street companies in 2009 and possibly creating the Greatest Depression the USA has ever witness in the past 100 years? Was it responsible for US citizens electing a politician as unqualified as Barack Obama? A Hope Dope we can't believe in? Every day we are subjected to Obama's annoying blame game whinny criticism of others when we know that he is the Commander-in-Chief in charge of everything that goes on in the USA and the world at large. At least George W. Bush does not make excuses when things go wrong. And let's not blame everything on poor ol' W. The US financial deregulation process had been going on from the Reagan years and accelerated during the Democratic Clinton watch. 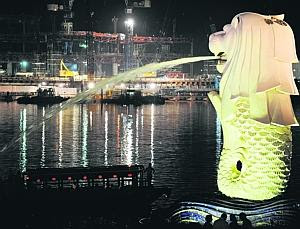 Now, back to Singapore. Is the damage on the Merlion a bad omen for Singapore? Well, the Merlion statute prominently stands watch over Singapore's Shenton Way financial district, just as the WTC is strategically located a the sea front near the Wall Street.
What does feng shui experts have to say about the lighting strike on the Merlion - the first significant reported incident in its 36 year history. Here are some polite assessments by our feng shui experts:
Master Clarice Georgia V Chan: "warn that “Deliverance” must be accompanied by change of mindset and attitude along with correct actions before new and better way of living can be achieved."

Geomancer John Lok of Fengshui0011.com is positive: "As the Merlion was hit by light on its head, it could signify that Singaporeans will be able to see more clearly, as this is a wake-up call to all Singaporeans."

Master Lim Koon Hian of San Yen Geomancy Centre, agreed: "the event signified that Singaporeans would experience a wake-up call, and a greater understanding of events around them."

Fengshui master Lee Yuhon: "The event marked the arrival of 'negative forces' from the south of Singapore. It was caused by negative forces which had accumulated in the area. The lightning strike could mean that something bad may happen in the southern part of Singapore."

Master David Tong of CMG Consulting: 'The Merlion is an icon of Singapore, and an icon getting struck by lightning is not a good thing. In Chinese metaphysics, we learn that everything happens for a reason. It could be that the recession we are already in could get worse."

Local Singaporeans blame the creation of the Marina Barrage which turn the Marina Bay from a healthy marine water body into a stale water reservoir. This has brought bad feng shui over the financial district that for years have benefited from the unimpeded tidal waters from the South China Sea.

My own feng shui expert is not too happy with the development. A hit on the head is no laughing matter, he says. It tells us that something is gonna make our heads spin round and round. Certainly, it is not the spinning of the casino roulette wheels at the Sands Marina Integrated Resort (IR). So all you still free spending Singaporeans out there, tighten your belts and get ready for the bad times. Those under 40 who have not seen a really bad recession, this will be a head kicker.

Hopefully, it will also be an eye opener for our political leaders too. After all, the ruling party, the PAP's logo looks like a lighting going through a big hole. This puts them at greater risk of some kind of "strike" as the party sorts of represents the "head" of the merlion. If they do not heed to the grumblings on the ground, they are likely to get a big surprise on Election Day or some ugly international incident could cast them in bad light.

The recent vicious physical attack on MP Seng Han Thong and threats on GRC MP Denise Phua is indicative on the rapidly changing social mood in Singapore due to declining standards of living and poorer career opportunities.
Let's hope things do not come to a head.


© http://comsg.blogspot.com - Lighting Strikes the Merlion - Good or Bad Omen?
Posted by comSG at 8:39 AM