Jewellery Singapore - Shortchanged on Gold
As recession begins to bite, some Singapore jewellers seems to be skimping of the gold content according to the Today's Consumer Alert report: "Not all that glitters is all gold" and Straits Times "Jewellery that's not worth its weight in gold" on 2 December 2008. 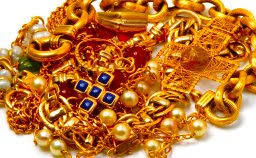 For the first time, the Consumer Association of Singapore (Case) has tested the fineness standard in gold sold in shops in the Singapore suburbs. Case found that out of the 30 pieces taken from 30 retailers, one-sixth (5 pieces) of the samples taken failed to meet the 22-carat or 91.6% pure gold standard. SAO said that most of the 5 failed its test by a few decimal points. The worst score was 85.94 per cent.

There have also been instances of 8 retailers overcharging for example charging customers for the gold that was lost in the making of the jewellery, a practice stopped here in 1995.

Also, most jewelery retailers weighed the gold items only when they were asked to do so.

Worse still, three out of the five items that failed the gold test came from retailers who were members of the Singapore Jewelers Association.

Two of the shops carried the SAO (Singapore Assay Office) certification yet sold jewelery that did not carry the SAO hallmark.

These jewellers are blaming their suppliers for their items failing the gold purity test. Hello? These jewelers should know that as sellers to the public, they are responsible in ensuring the gold meets the fineness standard. The buck stops with them. So they better have their jewellery items checked before they put it up for sale.
On 7 December 2008, the Singapore Jewellers Association announced that it has set up a Hotline: 6533-4053 for the public to call if they require assistance in getting a refund from association members whose 24k or 22k gold does not meet fineness standards. Members who flout rules may be blacklisted or kicked out of the association, though this has not been done before.
The jewellers' group is looking into getting a special X-ray device in its office so members can analyze any jewellery item's gold content in minutes.

How to Avoid Being Shortchanged on Gold Jewellery:

If jewellery items at certain stores are advertised at much lower prices than other retailers, there is reason for you to be on your guard. In gold jewellery, there is no such thing as "cheap and good". You get what you pay for.
© http://comsg.blogspot.com - Jewellery Singapore - Shortchanged in Gold
Posted by comSG at 6:33 PM

I agree there are a lot of leisure activities one can take up in singapore. Just count the number of singapore tourist attractions and you will know that Singapore ain't that boring a place.