Feng Shui: Marina Bay Sands IR
The Marina Bay Sands Integrated Resort (IR) is the biggest and most expensive development project ($5.4 billion on 50.9-acre prime waterfront site near the financial district,) undertaken in Singapore. It is also the world's most expensive casino project so far. Usually the undertaking of a major construction project like this in the country is an indicator of excessive market confidence. It usually precedes a major market top with a fierce recession following close behind. But life goes on, and in 2-5 years, you can expect business to be booming like never before.

The casino project is without its problems like escalating project costs and the financial problems of Las Vegas Sands. LVS problems is not due to earnings problems but the difficulty of getting funding for their many projects due to the current Credit Crisis. Once funding have been secured, things will proceed at full steam. The IR was slated for a staggered opening in 2009. (UPDATE: Now slated to open in early May 2010)

About Feng Shui
To most foreigners, it would seem that the Chinese are a superstitious lot. But feng shui is not about ghosts and spirits. It is all about living in harmony with nature. To make use of nature to improve our lives. To place things which could be potentially dangerous in a location where it would do the least harm. When people are in harmony with nature and themselves, they can do great things. Some of the feng shui is pretty much common sense things which we may overlook due to our disorganized and hectic modern lifestyles.


Marina Bay Sands IR - good feng shui or bad feng shui?
Many people blame the "bad" feng shui of the Marina Bay IR as the cause of Las Vegas Sands current problems. This sounds like gobbly-gook to me. How can a property that has yet to be completed bring bad luck? Now this is pure superstition or wishful thinking by the anti-gambling crowd who are hoping against hope that the project will fail.

Don't get me wrong. I'm against gambling too. But let's face facts. There are hundreds of Singaporeans who are going to Batam, Genting and Star Cruise's voyage-to-nowhere to gamble every weekend. If these silly folks got money to burn, it might as well be in Singapore and provide employment to the locals here - especially the 40-50 year old workers.

Many people think that the feng shui elements has been artificially implanted into the Marina Bay IR as an afterthought. However, architect Moshe Safdie and LV Sands maintain that they have utilized the services of the Chinese geomancy experts when designing the casino property. 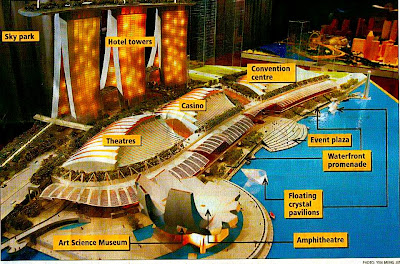 
Safdie wanted the building to capture the essence of Singapore as a garden city, make it an iconic and first of its kind building in the world and fusing it with good urban design sense. The 1 hectare (larger than 2 football fields) sky garden, maximize space for more greenery and provides a 360 degree view of the city and the Singapore Straits.

Critics said that the roof / sky garden looked like an aircraft carrier. To others, it represented an incomplete or broken flyover / expressway that goes nowhere.

Geomancer Victor Li, who has worked with The Raffles Hotel and The Grand Hyatt Singapore, said: "On their own, the three tall buildings look like three ancestral tablets and, with the sky garden, it looks like a broken flyover, with 'neither head nor tail'." He said the Mandarin phrase 'neither head nor tail' has a negative connotation, usually used to describe things that are incomplete and imperfect.

Geomancer Gwee Kim Woon says that the buildings are positioned in the shape of a bat and the Mandarin work for “bat” sounds similar to “luck”, so that is good news.

The Sharp Blade That “Cuts” The Financial District

Master Tan Khoon Yong of Way Onnet Group said it resembles a blade that will affect (cut) all buildings surrounding the IR, especially the Swissotel Stamford. "Also, because the rooftop is flat, it restricts the development and growth for the IR," he said.

Knife-edge buildings are not new in Singapore:
Master Chong said it's like a scholar's hat, meaning the IR will bring new learning to Singapore.

Pools on the Tower Rooftops


While geomancer Adelina Pang has no problem with the flat roof, she warned that the garden should not have ponds or water features, because this would symbolize a drowning building.
Master Chong said that the garden has water and plants, like a mountain. We have water, and the water flows to the MICE (meetings, incentive travel, conventions, exhibitions) business.


LV Sands wanted the towers to be iconic and dramatic

Critics said that the towers looked like ancestral tablets (tombstones) which is a bad omen.

Feng Shui Proponents disagreed saying that all buildings look like a rectangle ancestral tablets. The experts said that the towers with a gradually broadening base would negate any resemblance to an ancestral tablet.

Master Chong Swan Lek (who advised Genting Highlands, Marina Bay and Sentosa years ago) said: "You look properly, they are three warriors standing a foot apart. They are guarding the gateway to Singapore. Tablets are straight up, these are curved".
Gaps Between The Three Towers


Critics said that the wind tunnels (gaps between buildings) will bring bad luck to the financial district, and hotels such as Swissotel Stamford and The Fullerton.

Master Chong Swan Lek, 66, commenting on the negative remarks, said it is not a geomancer's job "to tell the architect what to do". His input to the Sands project, however, had the designers splitting one original hotel block into three to let the qi (wind) through. Asked if geomancy could reduce gambling's social ills, he said "You would have to tighten the law".

On the gaps, which critics say are wind tunnels that bring bad luck to the financial district:
Master Chong: We split them so that the qi (wind) could pass through. The Swissotel does not even face the IR. It faces Maybank, the mouth of the Singapore River, not the lagoon. The IR actually becomes the kao san (backer). They got it wrong. 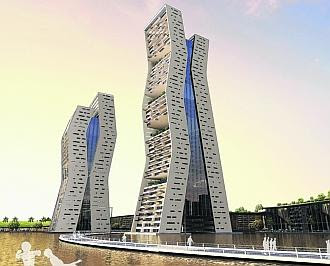 If you think the Marina Bay Sands towers seem odd, look at these funny-looking, crooked buildings that are coming up at Marina South. These buildings are called 'FLOATING' BLOCKS: Surbana. They are planning for 30- to 50-storey-high blocks on shallow pools, making them appear to float on water.

LVS wants the museum to look like a hand opening up to the heavens with three interwoven low-rise domes to give an impression of flow and fluidity.

People from both camps supported the idea of a bloom along the waterfront. in the form of the lotus-shaped Art-Science museum. Architect John Ting said: "To us in Asia, the lotus is providential and if you know how to capitalize on the concept of a lotus, it can be iconic."

Master Cheong said: "Art-Science Museum is shaped like the divine lotus. Its five fingers complements the Esplanade. Water flows in and is recycled. Money flows into the casino and back to Singapore, so it won't flow out into Batam and Bintan" - which also plans to have competing casinos.


Master Chong says they are like three coins. In feng shui, when a household has problems, you give them three coins to ward off evil and bring prosperity. Some amateur feng shui practitioners suggested that gamblers could get lucky if they throw three coins in the fountains at the IR.

Feng shui-friendly elements — glass, crystal and water are put into good use to enhance the qi qualities of the property.


The site has yin water flowing from right to left. Entering from between 95 - 105 degrees more towards 95, water will enter from the birth 长生 or nurture 养 direction and exit from either sickness 病 or death 死 direction. These are based on estimation from a Google map. Although there isn't much benefit from any of these water entrances, at least water exits from very bad directions. This site is unable to tap on the prosperity 帝旺 incoming water direction unless it faces east, which is not feasible.

The highway behind the casino is also a cause for concern. This is probably why the architecture of the site has 3 such tall towers. They are to block off the energy from behind. The highway will have a north-south orientation. Referring to the 3 combination water theory again, it is actually favorable for traffic from to move from north to south. But gravely unfavorable to move from south to north. And since the highway is 2-way. The feng shui master must have not left this to chance and decided to block it off altogether.

Based on the feedback from my usually reliable feng shui experts, it looks like LVS' Marina Bay Sands IR will bring good luck to the company if it survives the bad patch of project financing difficulties.

Some anti-government and anti-casino critics are hoping that the Marina Bay Sand project will fail. This is highly unlikely as I am reliably informed that there are many corporate "big guns" waiting eagerly at the sidelines for a chance to muscle in on this casino action should LVS run into problems - especially those who had failed to secure this lucrative 30-year concession earlier. As Chinese always say: "Crisis = Opportunity". So with or without LVS, the Marina Bay IR would still be completed. But LVS holds all the good cards, so it is highly likely they will win this high stakes game.

The plus factors in LVS favor: LVS has recently announced that much of its 120,000 sqm convention space has been booked by some 15 international MICE operators till 2013. On 5 December 2008, it said that 50% of its retail space (which is 20% smaller than VivoCity) of 800,000 sqm had been taken up mainly by 300 high fashion European, American, Japanese and some Korean labels including crowd drawer Victoria Secrets. The bigger stores will open in 2009 and the others in 2010. LVS has put on hold projects that have lower yield and putting greater resources on potential projects like the one in Singapore.

Singaporeans are not poor people. The tai tais alone can occupy several casino tables. Casinos have deep pockets and can afford to offer perks like complimentary food, drinks & hotel rooms (it has 2,500 premium hotel rooms). It can also afford to provide VIP treatment (like invitations to significant photo opportunity events) and tickets to concerts to get the well heeled mahjong crowd to regularly patronize their 15,000 sqm casino. Its many attractions like the Art and Science museum, a skating rink, boat rides through the shopping mall and two floating crystal pavilions for dining and entertainment will also pull casual visitors to the gaming tables.


Believe me, gambling is big business in Singapore. Singaporeans just love to gamble. They will bet on anything that moves. Some have gone to jail just to prove the point. So let the dice roll and may the feng shui force be with you when you are in the casino - a definite maybe.
© http://comsg.blogspot.com - Feng Shui: Marina Bay Sands IR
Posted by comSG at 5:51 AM

Wow, pretty detailed and interesting article. Amazing how you were able to collate all the opinions of the various Feng Shui Masters. Would you still believe in Feng Shui seeing how the master can have not just differing views but sometimes total opposite views.... haha