The pedestrian connection incorporates a unique ‘double-helix’ structure, a world’s first in architectural and engineering bridge design. It comprises two opposite spiraling steel members that are held together by a series of connecting struts to form a tubular structure. This provides an inherent strength, ideal for the curved form. Its resemblance to the structure of DNA, the basic building block of life, symbolizes “life and continuity”, “renewal”, “everlasting abundance” and “growth”, reflecting our aspirations for Marina Bay. 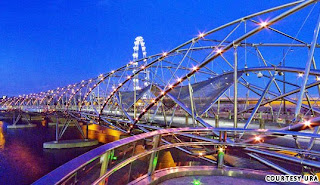 The curved Double Helix Bridge spans the Marina Bay and parallels the Benjamin Sheares Bridge (ECP).
Made of special duplex stainless steel, it is is already being touted as an architectural marvel and engineering feat. The helix structure is phenomenal because if all the steel tubes forming the major and minor helix were laid end to end, it measures 2,250 meters long, and the entire structure weighs about 1,700 tons, which is equivalent to about 1,130 saloon cars.

The major and minor helix, which spiral in opposite directions, have an overall diameter of 10.8 meters and 9.4 meters  respectively, or about three-storeys high.
The total cost of Singapore's curved Double Helix Bridge, Youth Olympic Park and the performances Bands (jugglers, stilt-walkers and fire-twirlers)  / 2-minute pyrotechnic display is  S$82.9 million.
It is a 5 minutes walk from one end of the Helix bridge to the other. The full bridge will lead to the Marina Bay Sands IR when its Phase II opens in June 2010.  MBS First Phase opens in early May.

Even in the evenings, the bridge lights are beautiful and the mood lights can be adjusted to suit major events by the Bay like the annual Singapore NDP (National Day Parade).
The pedestrian footpath bridge is built to take 16,000 people.  It arches 8.8m above Marina Bay, giving enough clearance under it for pleasure craft to enter the Bay.
A new 6-lane vehicular bridge, running parallel, is next to the Double Helix Bridge will open on April 25.
The Marina Bay already has many attractions like the original Merlion statue, the Esplanade Theaters by the Bay, the Floating stage Platform (venue of the NDP of recent years), the world's tallest moving observation wheel - Singapore Flyer , the Formula 1 (F1) City Night Racing Track and the Marina Barrage.
The Double Helix Bridge adds to these yet to be opened upcoming Singapore icons:

which will compete with established tourism orientated areas in Singapore like Orchard Road and Sentosa.