International Companies Blacklisted Worldwide by the Timeshare Council
dated 8 August 2008 is a useful international reference guide when dealing with world timeshare companies. Check this global list before you do any business with them.

Timeshare and timeshare-related complaints remain at the top of Consumer Association of Singapore' ( CASE )'s list of top consumer problems. From January to August 2008, CASE received 1,213 complaints against timeshare companies.


*2008 (1 January - 31 August 2008)
+ 2006 (1 January - 31 August 2006)
NOTE: Not all timeshare disputes are reported to CASE as people don't want to go through the trouble of filing complaints (something scam companies are counting on). A high percentage of tourists who fall prey of such fly-by-night schemes also do not report to CASE as they are generally unaware of the laws of Singapore. 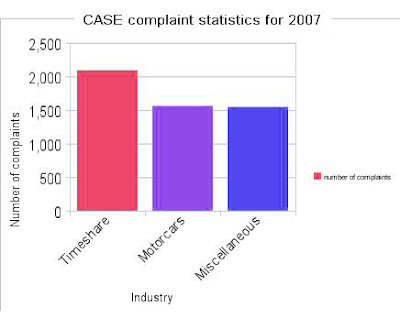 Be wary of companies whose names start with the following alphabets:
ACDEGHIJLMNOPTUVWZ. These companies are on the watch list of International Timeshare Councils, CASE and mentioned in negative light in Singapore forums on timeshares.

For those who need assistance, Case's hotline is 6463-1811. Help stamp out timeshare scam by not dealing with unaccredited companies!